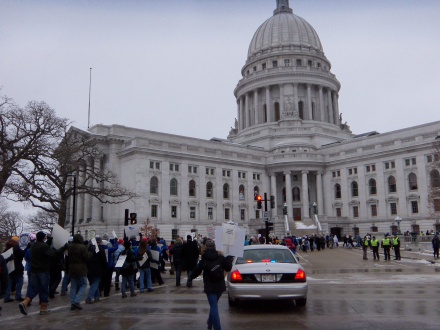 Wednesday, over a thousand protestors gathered in Washington, D.C. in front of the D.C. offices of the Wisconsin and Ohio governors as part of a worker solidarity rally. NFFE joined students, workers, and union members from several states in a show of support for workers who are battling to retain their collective bargaining rights in Wisconsin. The battle cries were loud, as people protested Governor Scott Walker’s (R) attempts to crush unions in his state.

Congresswoman Donna Edwards (D-MD) addressed the crowd offering her support and solidarity with the brave workers gathered in Madison and state capitals across the Midwest. With gatherings such as these happening around the country, union leaders are in lockstep to fight this battle until the bitter end.

“I am honored to stand here with my union brothers and sisters today,” said NFFE National Organizing Coordinator Brittany Paull. “We are all willing to share in the sacrifices for difficult times such as these, but Governor Walker is not seeking to balance the budget, he is seeking to bust the unions.”

She continued, “Unions play an essential role in bettering the lives of workers around the world. To deny Wisconsinites the ability to collectively bargain would be a tragedy that would cripple the middle class, and send this working people everywhere backwards.”

Public sector employees have taken hits to their pay, benefits, and pensions in the past year, and now Governor Walker wants to take away the last equalizer in the fight for workers rights – their unions. When workers stand together and make their voice heard, there is nothing or no one that can take away their hard-won rights.