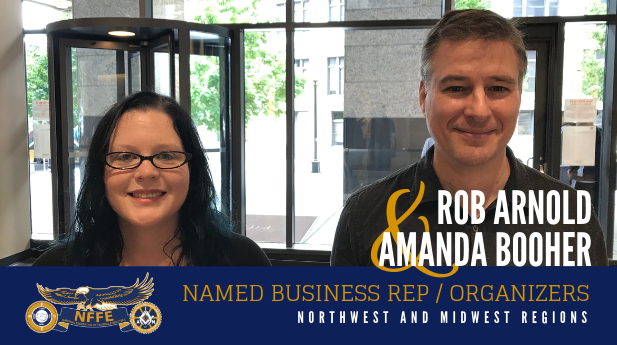 “I am very excited to see what Rob and Amanda can do for this union,” said Randy Erwin, NFFE National President. “Rob is a well-established and experienced leader with tremendous work ethic and an impeccable track record of high-quality representation, improving his local, and achieving membership growth. Amanda is a person who has spent over a decade working tirelessly to build the skills to be ready for this opportunity. She is passionate about representation and organizing. Having served in multiple executive board positions in her local, she has strong experience in a wide variety of areas. This union is extremely lucky to have found two outstanding candidates to replace outgoing BR/Organizers Jan Thompson and Jim Davis, both pillars of strength for this union for many decades.”

“I was lucky to have great mentors who helped shape my development,” said Rob Arnold.  “I wouldn’t be accepting this position without their help and guidance over the years. I was also very lucky to have sharp members and great leaders in my local, which consistently made me and Local 1998 look good.  I am eager to meet with members from different agencies and excited about building and improving their locals. Overall, I am enthused about getting the opportunity to have a positive influence on a larger portion of our union.”

“I’m very excited,” said Amanda Booher. “I love this organization and I want to help grow it. I’ve been a part of this union for twelve years and seen many changes over time – the way it is run and how it is impacted by different administrations. This is a strong organization that I am proud to be a part of, and I want to keep the positive momentum going by growing the union and being more active in it. I am looking forward to the challenges ahead.”