Last Thursday, the Senate passed the Employment Non-Discrimination Act (ENDA) with a bipartisan vote of 64-32. The bill seeks to further workplace equality and drew the praise of numerous LGBT advocacy organizations. The bill forbids workplace discrimination on the basis of sexual orientation and gender identity while also allowing lesbian, gay, bisexual, and transgender individuals and their families to enjoy critical employment protections that have been long enjoyed by other segments of the workforce.

Currently, there is no federal law protecting the U.S. LGBT workforce from employment discrimination based on sexual and gender identity. Without a federal law providing the protections, states have been left to decide the protections extended to LGBT employees. In 34 states, it remains legal for an employer to terminate an employee based solely on their sexual and gender identity. ENDA is aimed at ensuring everyone, regardless of their sexual orientation or gender identity, is protected from discrimination in the workplace.

Despite the bipartisan vote ENDA enjoyed in the Senate, House Leadership has indicated that it will not bring the bill up for consideration. The legislation has considerably low support among House Republicans, and counts among its opponents House Speaker John Boehner. Little hope is being placed on the passage of the ENDA is the GOP-controlled House of Representatives.

“We applaud the U.S. Senate for passing this long overdue legislation to provide critical workplace protections for the LGBT community,” said William R. Dougan, National President of the National Federation of Federal Employees. “It is surprising that we are still having this kind of debate. Employment discrimination is not acceptable. The LGBT community continues to suffer discrimination in the workplace, and they deserve a vote on this bill in the House. We hope leadership will do the right thing and bring this bill to the floor for a vote.” 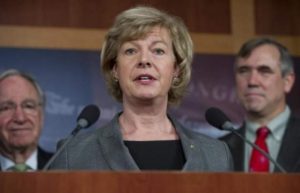 Senator Tammy Baldwin (D-WI), the first openly-gay elected Senator, says ENDA
could pass in the House if Speaker Boehner brought the bill to the floor.