Employees of the Army Contracting Command (ACC) at Aberdeen Proving Ground in Gunpowder, MD have a rich history of NFFE/IAM representation. However, a recent agency realignment brought a new group of contractors to the base, forcing a combination between new and veteran Aberdeen ACC employees. The new contractors also had a history of union representation.

NFFE was determined to continue its proud representation of Aberdeen Proving Ground ACC employees. Losing was not an option.

Following the FLRA election notice, NFFE/IAM Local 178 mobilized to defend their members. Local NFFE officers worked with the national office to develop a winning election strategy. While spirits were high following countless organizing discussions, the outcome was uncertain because the preparations of the competing union were unknown.

“We did not know exactly what we were going to be up against,” said Local 178 President Lisa Foust. “Our opponents had been relatively quiet, which resulted in a general unease among the local union leadership.”

All of the preparations came down to one week: election week. The NFFE team dispatched numerous staff members to Aberdeen to help Local 178. The days were long, with the NFFE team often huddling before sunrise and canvassing into the night. Every step of the way, the NFFE team received positive feedback from local members and bargaining unit employees.

On Election Day, NFFE received encouraging reports from voters and Local officers. And nearly an hour after the polls closed, the results were in.

NFFE won, in a landslide.

The final vote was 88 percent for NFFE/IAM and 12 percent for its competitor – a 76-point margin of victory. Clearly, the grassroots campaign paid off in a big way. NFFE Local 178 will continue to represent ACC employees at Aberdeen Proving Ground and will be welcoming hundreds of new bargaining unit employees. The vote demonstrated the satisfaction NFFE members had with the representation they were receiving.

“When we found out that a union representation election was set at Aberdeen, we knew we had to mobilize,” said William R. Dougan, NFFE/IAM National President. “NFFE has an unwavering dedication to our membership, and we wanted to make sure Local 178 had every tool available to come out on top of this election. I am very proud of the work our folks put into this campaign and the positive results they achieved.”

“Congratulations to all the NFFE/IAM Local 178 members and thanks to everyone who worked so hard to make this overwhelming victory possible,” said IAM General Vice President Robert Martinez, Jr. “We’re proud that our long history at Aberdeen Proving Ground will continue. We welcome all of our new bargaining unit employees and look forward to working together in the future.” 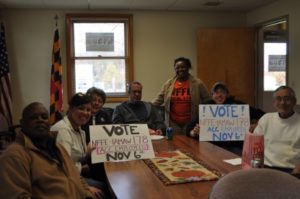 NFFE/IAM organizers canvassed hundreds of NFFE/IAM Local 178
members and other potential members in an election campaign at the
Army Contracting Command (ACC) at Aberdeen Proving Ground in Gunpowder, MD.