As you work to reconcile the Senate and House budget proposals, the Federal Workers Alliance (FWA), comprised of 19 unions representing 300,000 federal employees, would like to weigh-in with you regarding the impact that any final deal could have on our nation’s civil servants. The FWA urges budget conferees to craft a long-term budget solution that ends the sequester without inflicting additional financial burden on the backs of federal employees.

Every day federal employees provide essential services to the American people, including ensuring the safety of our food, curing disease, caring for our veterans, maintaining our military readiness, protecting our borders, and bringing criminals to justice. The ability to recruit and retain talented employees is necessary to carry out these critical missions. Further cuts to employee pay and benefits will hinder the ability to recruit and retain the nation’s top talent.

Federal employees have contributed more than $114 billion over the past three years toward deficit reduction. This staggering amount is the result of a three-year pay freeze, multiple furlough days due to sequestration, and an increase in pension contributions from new federal workers. As a result of the ongoing three-year federal pay freeze, a worker earning $40,000 annually, will lose $54,840.19 in cumulative income over the next 20 years . For many families, that loss of income is the difference between being able to make a mortgage payment or put food on the table. Federal employees have shouldered an excessive weight in budget cuts, and they have long proved their tenacity and dedication. Federal employees and their families have experienced enough turmoil.

Furthermore, it is important to dispel common misconceptions surrounding federal employee pensions. The average annual pension benefit for FERS annuitants is $12,800 per year. In recent years, Congress has changed the FERS retirement system to require new hires to pay nearly quadruple the amount toward their pensions with no added benefit. This change costs the average new hire more than $1,000 per year in lost take-home pay, a major hit for such a modest retirement benefit. It is unjustifiable to be looking at making further cuts to federal retirement when the last round of pension cuts just went into effect. The modest pension these employees receive is an essential element of their retirement security.

Federal employees take pride in the work they do and the services they provide to our nation. However, the constant Congressional attacks on their pay, benefits and job security have driven morale among federal workers to an all-time low. As you work to reach an agreement on a bipartisan budget resolution, the undersigned unions of the FWA urge you to stand against any and all proposals that aim to take more from our dedicated federal workers. Thank you for your consideration. 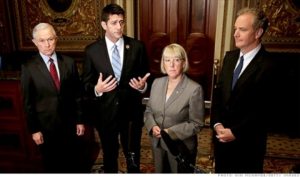 Republicans Jeff Sessions and Paul Ryan and Democrats Patty Murray and
Chris Van Hollen are leading a bipartisan group of lawmakers who are
trying to forge a budget agreement to fund the government for 2014.