Over the past two weeks NFFE has told you the story of John Lauer, a wildland firefighter and NFFE member who took a stand for thousands of his fellow federal firemen who lack health insurance. At first, word only spread in a trickle. But that has all changed in the matter of a few days, and in a very, very big way.

Just this week Lauer’s story has been featured in major media outlets like the Washington Post, Denver Post, and the Rachel Maddow Show. Online the story has gained even greater traction through features on ThinkProgress, the Daily Kos, Democratic Underground, and many more. All told, dozens of individual stories have been published across TV, radio, online, and print media – just in a few short days.

So how did we get here? It all started with John Lauer and some friends from his fire crew starting a petition on www.change.org. The petition asked President Obama to allow wildland firefighters like themselves to purchase health insurance just like any other federal employee. Soon after, NFFE took notice of the petition and worked with John and others to get as many signatures as possible. Expecting no more than a few thousand, Lauer was shocked to learn that in a matter of just four days, his petition grew from 732 signatures to over 100,000. But the surprises did not stop there.

As the petition went viral across the web, members of the media began taking notice. Stories started popping up in media outlets from Colorado, to Washington D.C., and nearly everywhere in between. In the past 24 hours alone, over two dozen stories from all over the nation have shone a light on the suffering of federal firefighters. From here, there is no telling how far this will go. To see these stories and more, check out our NFFE in the News page.

In the end, however, this campaign is not about publicity – it’s about making sure the brave men and women who protect our communities from wildfire get the protection they need. They have earned health insurance. Do you part to help our firefighters, and sign our petition today. 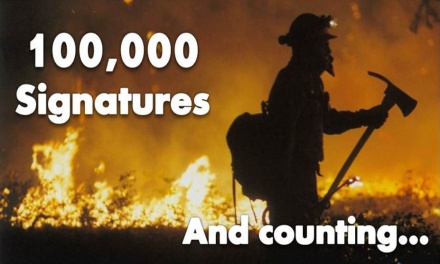