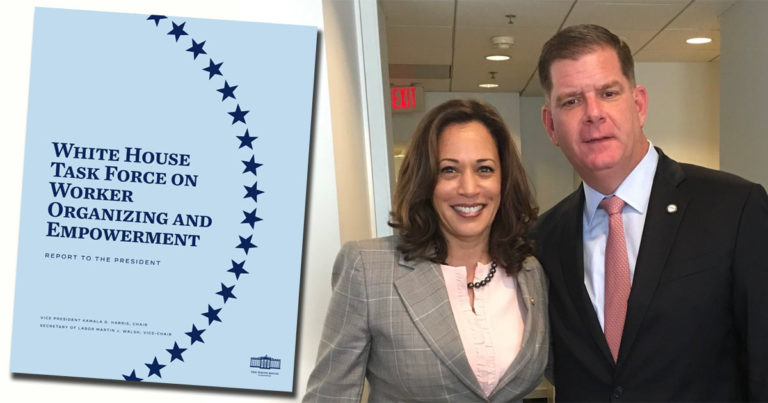 Washington, D.C. – Today, the National Federation of Federal Employees (NFFE) is praising a Biden Administration report issued yesterday from the White House Task Force on Worker Organizing and Empowerment that details nearly 70 recommendations to President Biden for ways the Administration can improve worker organizing and collective bargaining for both public and private sector employees.

“We are very pleased to see the Biden-Harris Administration taking real action to help workers form unions and engage in collective bargaining,” said NFFE National President Randy Erwin. “The ability to form and join a union is an essential right that has been systematically denied to millions of American workers. This has deprived countless workers access to good-paying middle-class jobs and has contributed greatly to the squeezing of the middle class. It is very refreshing to see the Biden Administration doing what it can to make forming and joining a union more attainable. This effort helps working people everywhere in this country.”

Several of the recommendations in this report would have a direct impact on the ability of federal workers to form and join unions like NFFE. The report recommends an initiative to increase awareness among workers of their federally protected right to organize and bargain collectively. The report further suggests facilitating exposure to unions during the hiring process for job applicants and onboarding, enhancing communications with federal bargaining unit employees concerning their right to union representation, increasing unions’ access and ability to communicate with employees, and ways employees can engage with their union.

“The Biden Administration is clearly looking to make a difference wherever it can, and that starts with the federal workforce,” said Erwin. “Union organizing among civil servant federal employees has been made needlessly difficult in recent decades. The recommendations in this report, once implemented, will tear down some of the barriers that federal workers currently face in organizing, and it will ultimately empower workers to make the workplace fairer and just. These are common-sense reforms that will have a substantial positive impact on workers.”

“NFFE thanks Task Force Chair Vice President Kamala Harris, Vice Chair Secretary of Labor Martin Walsh, and all the members of the Task Force,” Erwin concluded. “We look forward to working with the Biden Administration to implement these excellent recommendations.”