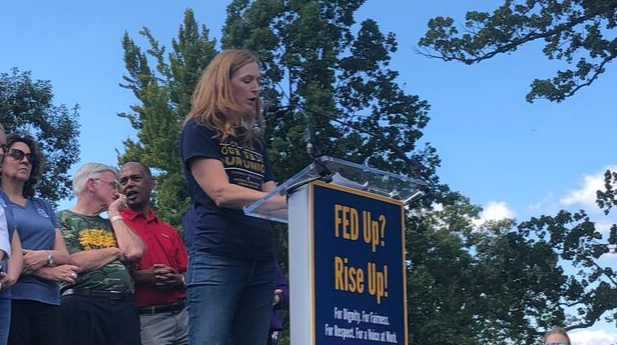 Washington, D.C. – At Noon today, the National Federation of Federal Employees (NFFE) hosted a rally on Capitol Hill drawing top lawmakers from Congress and hundreds of supporters to speak out against ongoing political attacks against individual federal workers and the civil service protections that keep the Executive Branch free from political corruption and coercion.

NFFE Secretary–Treasurer David Stamey spoke at the rally, demanding a stop to efforts to water down civil service laws and workforce protections.  “This President wants to get rid of unions and the independent voice of federal workers,” Stamey stated.  “This Administration wants to kill due process and fairness in the workplace.  They want to hire and fire at-will because they don’t care about discrimination, or qualifications.  They want to bring back the corruption of the Spoils System and erase 243 years of hard lessons learned in government.”

Over the past two years, career public servants are increasingly subjected to threats, unlawful punitive actions, and political intimidation.  Federal workers’ unions—lawfully designated and responsible for representing federal workers—are also under attack.  Federal employees serve as the operators and watchdogs of the government’s mission to the American people, and federal labor unions protect their right to be treated fairly without enduring political intimidation or coercion.

NFFE-Forest Service Council Vice President Region 6 and Local 1968 steward Erin Kidwell, a U.S. Forest Service worker from Oregon, expressed her concern over the deteriorating work environment at the U.S. Forest Service and its effect on the national forests.  “The Forest Service was once an employer of choice, but our morale is plummeting,” Kidwell stated at the rally.  “Hard working, passionate employees who care so much about our public lands are starting to lose the resiliency we were once known for.”

Kidwell went on to state that employees are exhausted, demoralized, filled with anxiety, and also dealing with heavier workloads due to unfilled vacancies.  “These are not the steps an agency takes to attract the next innovative generation to choose public service over higher paid private sector jobs,” Kidwell concluded.
OFFICIAL PRESS RELEASE – print version
Become a Member
NFFE Toolbox
Advocacy
Tweets by NFFE_Union