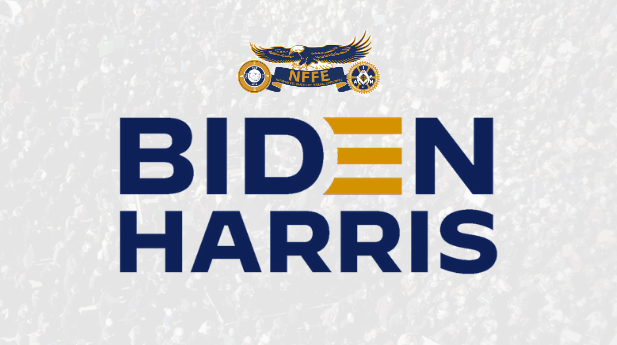 Washington, D.C. – Today, the National Federation of Federal Employees (NFFE) congratulates President-elect Joe Biden and Vice President-elect Kamala Harris on their victory in the 2020 U.S. presidential election.  Upon winning a vast majority of electoral votes and the most popular votes in history over the opponent, it is presumed now that Joseph R. Biden, Jr. will serve as the 46th president of the United States.

The election results were met with a measure of relief by federal labor unions and other federal employee organizations, many of which spent a tremendous amount of time and resources over the past four years combating anti-worker and anti-labor attacks from the current presidential administration.  The announcement today, indicating that the Biden administration will occupy the White House in January to lead the Executive Branch and the nation, was received with welcomed resolve in the federal civil service community.

“The fight for the rights of federal workers and for the preservation of an apolitical civil service is never over,” continued Erwin.  “At least we know that in January, we can begin to repair what was badly broken by the current administration.  We look forward to working with the Biden administration as they begin the transition process, and we stand ready to assist our next commander-in-chief and vice president in every way possible.”