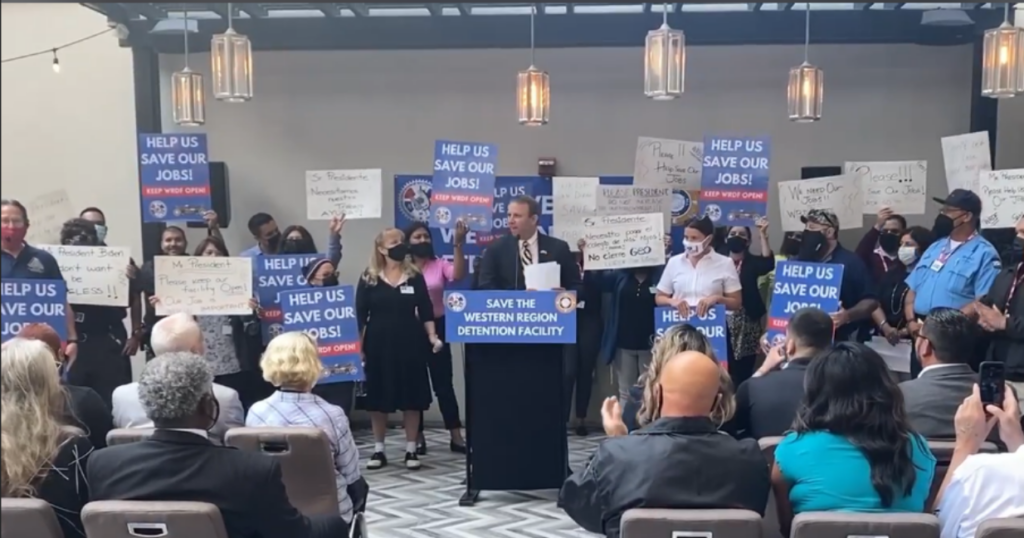 San Diego, CA. –  Today, the National Federation of Federal Employees (NFFE) is pleased to announce the Western Region Detention Facility (WRDF) in San Diego, will remain open because a six-month contract extension reached between GEO, the employer, and the U.S. Marshals Service (USMS). The contract extension follows a recent campaign by union employees at the facility represented by NFFE-IAM to keep the center from closing permanently on September 30th. The closure was impending due to an Executive Order banning the U.S. Department of Justice from renewing contracts with privately operated detention facilities. However, closing the center would have been detrimental to the employees, the detainees they serve, as well as the San Diego community. These harmful consequences were recognized by bipartisan and non-partisan groups and members of the community alike, resulting in diverse support to keep the WRDF open.

“The contract extension is a wonderful outcome for the dedicated workers at the WRDF and the greater San Diego community,” said NFFE National President Randy Erwin. “Detainees will continue to receive high quality services and access to their family, friends, and legal representation, which would have been jeopardized if the WRDF had been closed. This extension allows the hard-working employees of the WRDF to keep their good union jobs, healthcare, and security during the ongoing COVID pandemic. We are grateful for the USMS decision to extend its contract with the WRDF.”

“While we are pleased with the short-term solution, there is still work to do in our efforts to keep the WRDF in operation after the contract extension expires,” continued President Erwin. “NFFE is continuing to investigate avenues to keep the WRDF open for a longer period of time.”

The contract extension was made possible by the efforts and collaboration of many groups in the San Diego Community, including WRDF employees represented by NFFE-IAM, the San Diego and Imperial Counties Labor Council, the San Diego Chamber of Commerce, the San Diego Sherriff’s Department, among others. Employees sent heartfelt postcards to their members of Congress and spoke at a press event to raise awareness for their cause. With letters of support from several community groups, as well as Congressman Scott Peters, the negative consequences of the WRDF closure were understood by USMS and the San Diego community.

“NFFE is grateful for the leadership and support from Representative Peters, who shared our concern over the WRDF closure,” said President Erwin. “His voice carries a lot of weight in the San Diego community, and without his support, these workers in his district would be facing unemployment. NFFE commends Congressman Peters for stepping up and helping save the WRDF.”

Established in 1917, the National Federation of Federal Employees is the oldest union representing civil service federal employees.  NFFE represents 110,000 federal employees in 35 departments and agencies government-wide. NFFE is affiliated with the International Association of Machinists and Aerospace Workers, AFL-CIO.

For more information, go to www.nffe.org.