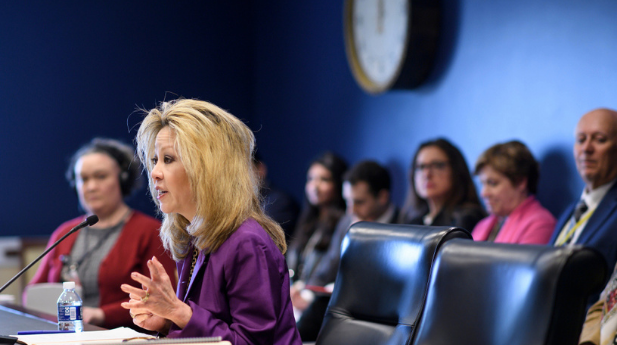 Washington, D.C. – Today, Randy Erwin, National President of the National Federation of Federal Employees (NFFE) released the following statement regarding the nominations by President Joseph R. Biden for Susan Tsui Grundmann to the Federal Labor Relations Authority (FLRA) and for Kurt Rumsfeld to General Counsel of the FLRA.

“I am extremely pleased with President Biden’s nominations of Susan Grundmann and Kurt Rumsfeld to the FLRA as Member and General Counsel, respectively.  These nominees join a third, Ernest DuBester for Chair of the FLRA, to form a highly qualified team of dedicated professionals who will properly execute the mission of the agency.

“Susan Grundmann served as NFFE General Counsel from 2003 until 2009 when, upon Senate confirmation, she left to Chair the U.S. Merit Systems Protection Board (MSPB).  Chairman Grundmann’s tenure at the MSPB was celebrated for modernizing the electronic filing system, reducing case backlogs, and elevating the operational efficacy of the agency.  Most recently serving as Executive Director of the Office of Congressional Workplace Rights, Ms. Grundmann oversaw a major transformation of the office to support enhanced requirements under the Congressional Accountability Act to adjudicate employee disputes on Capitol Hill.  I am excited to see her nomination to the FLRA move forward and I remain hopeful for a very quick and successful confirmation in the Senate.

“Likewise, I am excited to see the nomination of Kurt Rumsfeld for General Counsel of the FLRA.  Mr. Rumsfeld is an extremely qualified nominee having served at the FLRA since 2013 in senior roles including Assistant General Counsel.  Mr. Rumsfeld began his career in federal workforce law as an attorney-advisor for the U.S. Department of Labor, after which he practiced labor and employment law with a private firm for 17 years.  With Mr. Rumsfeld’s heavy experience in federal labor law and with his deep operational knowledge of the Office of the General Counsel, he will bring the excellence one expects to such an important position.

“I would like to thank President Biden for three excellent nominations to the FLRA.  Given the professional experience and qualification of all three nominees, there is no reason to delay completion of the confirmation process in the Senate and move speedily to a vote.  There is much work to be done at the FLRA and I am sure these nominees will hit the ground running, returning the FLRA to its intended mission.”