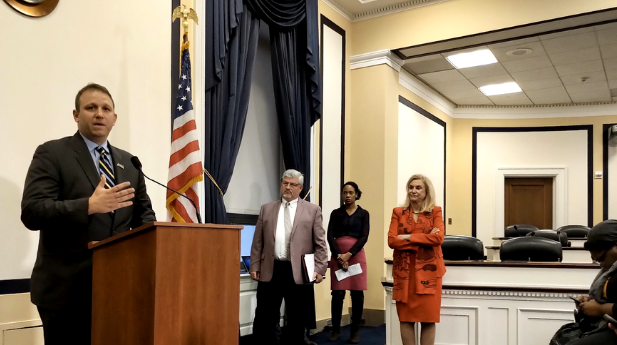 FOR IMMEDIATE RELEASE
Contact: Brittany Holder
Phone: 202-216-4424
Washington, D.C. – Today, the National Federation of Federal Employees (NFFE) National President Randy Erwin joined members of Congress to appeal to Senate Republicans to pass a provision allowing 12 weeks of paid leave for federal employees to care for a new foster child, an adopted child, or a newborn baby.  The paid parental leave provision is contained within the 2020 National Defense Authorization Act (NDAA) bill, the final version of which was recently approved by the bill’s conferees from both parties in the House and Senate.  The final version of the NDAA is scheduled for votes in each chamber over the next few days, although some Republican senators are hesitant to offer a new benefit to employees.

“I talk to the federal workers we represent that are trying to balance their career as a VA nurse, or wildland firefighter, with the demands of providing for their families,’ stated Randy Erwin, NFFE National President.  “And let me tell you, it is not easy. Paid parental leave is going to help those who need it.  And the pros of establishing paid parental leave do not stop with benefits to employees.  Federal agencies will be better able to recruit the best and brightest to federal service, and taxpayers will benefit because agencies will save millions of dollars due to lower turnover rates.”

The paid parental leave provision was taken from the Federal Employee Paid Leave Act (H.R. 1534 / S. 1174), different versions of which have been introduced in each congress for the last two decades.  NFFE and other proponents of the bill say this category of leave is commonly offered in the private sector and is becoming the norm within state and local governments.  Currently, federal employees must exhaust all sick and annual leave to care for new family members, often forcing employees to take unpaid leave.  The United States is one of the very few developed nations to not mandate any form of paid family medical leave.

“I’d like to thank Chairwoman Maloney, Chairman Smith, Senator Brian Shatz and the House and Senate Armed Services Committees for including this critical provision in the National Defense Authorization Act,” Erwin continued.  “Finally, I’d like to thank our NFFE-IAM members who have fought for paid parental leave for decades.  If we get this done, it will show that persistence pays and it shows that our government is responsive to the real needs of working families.  This bill is not the end-all-be-all, but it is a huge step in the right direction, and it deserves the support of every House Rep. and Senator in Congress.”