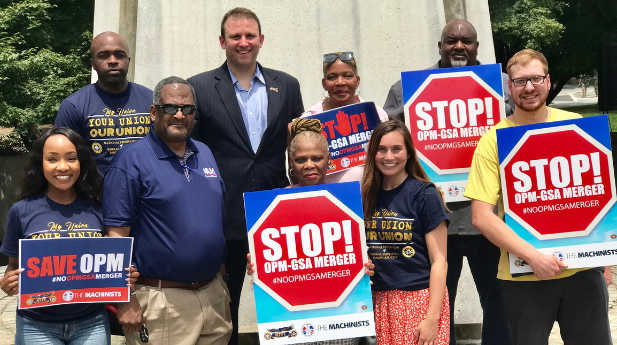 Washington, D.C. – Today, the National Federation of Federal Employees (NFFE) and the American Federation of Government Employees (AFGE) rallied near the headquarters of the U.S. Office of Personnel Management (OPM) to protest the Trump administration’s plan to dismantle the agency.  Several high-ranking members of Congress spoke at the rally, including House Majority Leader Steny Hoyer.  The rally was in response to a recent threat from President Trump to furlough or layoff federal employees and contractors who work at OPM unless Congress withdraws its bipartisan resistance to his plan.

“We are dealing with a president who would rather layoff American workers instead of admitting that his so-called plan to break up the government’s human resources department is fatally flawed and without legitimate purpose,” stated NFFE National President Randy Erwin. “OPM was created to protect the career workforce from patronage, discrimination, corruption, and political overreach which ultimately ensures that the U.S. government works for all Americans, not just the affluent or politically connected.  This move would achieve the exact opposite.”

The Trump proposal to dissolve OPM was poorly received earlier this year in Congress and it failed to attract any support from stakeholders, including management organizations or whistleblower and good-government groups.  Most of the widespread criticism of the proposal focuses on the questionable legitimacy of the proposal, including a lack of cost-analyses, disjointed short and long-term visions, an absence of candor regarding continued enforcement of merit system principles and laws, and an incoherent justification for a wholesale dissolution of OPM.

“OPM was created through the Civil Service Reform Act of 1978 to be a non-partisan, independent agency that serves as the chief human resources agency and personnel policy manager for the Federal government,” Erwin added.  “The proposal to dismantle OPM is a purely political move grounded in the self-interest of the Trump administration.  I believe a better solution is to focus on proper funding and qualified leadership to run the agency to support its critical mission.  In any regard, dissolving the human resources department of the largest corporation in the world seems like a pretty foolish idea.”