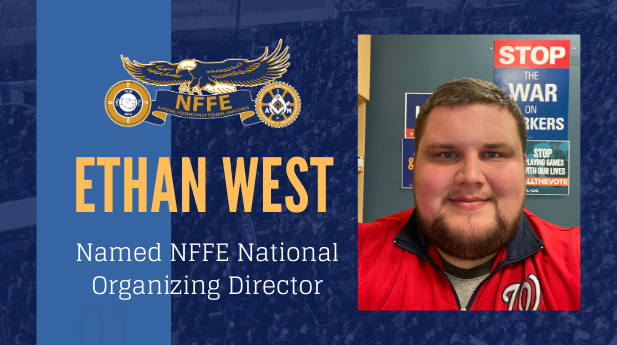 The National Federation of Federal Employees (NFFE) is proud to announce that Ethan West has been named National Organizing Director. Ethan is an experienced organizer that has spent time on staff at the American Federation of Government Employees and the National Association of Government Employees. He brings a wealth of professional federal sector organizing knowledge and ability to the position.

In May, NFFE announced the National Organizing Director vacancy, and accepted applications for more than one month. In the last several weeks, multiple candidates interviewed for the position. Late last week, West was offered the National Organizing Director position, which he accepted. He will begin his assignment with NFFE starting August 17, 2020.

West was born into a Union household and spent much of his formative years around Unions. He earned a bachelor’s degree from Frostburg State University where he studied political science, law and society. During and shortly after college, Ethan held various positions with Western Maryland Central Labor Council, United Food and Commercial Workers, and Working America.

“I am very excited to see what Ethan can do for our Union,” said Randy Erwin, NFFE National President. “I believe he is a tremendous fit for NFFE. Ethan is hungry for the opportunity to lead a unon-wide organizing program and show what he can do. He’s very motivated to make NFFE’s organizing effort the best it can be and grow the Union. I can’t wait to start working with him.”

“I’m extremely excited to be a part of growing this union and expanding our power, especially during such an important moment for federal employees,” said West. “After spending the past several years in federal labor, and nearly my whole life in the labor movement, I’m thrilled to be working with such a strong, committed organization with a vision focused on being organized and being ready to take on any challenge. I can’t wait to hit the ground running and to work with our locals and staff to make that vision a reality.”