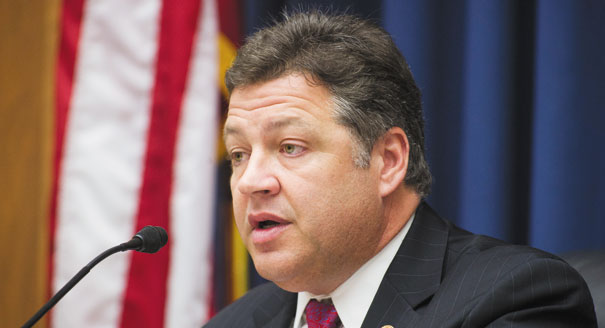 House Republicans pushed through committee, in a 32-25 vote, a six-year reauthorization of the Federal Aviation Administration that includes a plan to hand over the operations and regulation of the nation’s air traffic control system to private corporation. Transportation and Infrastructure Chairman Bill Shuster (R-PA), and author of the dangerous and profiteering AIRR Act (H.R. 2997), hopes the bill gets to the House floor next month. However, it is likely that the bill will face opposition from other House Republicans.

Although the privatization plan is supported by President Trump, Republicans in the Senate have also voiced opposition to the idea, and have discussed a bill (S. 1405) introduced last week which doesn’t include the spinoff proposal. In fact, some Republicans Senators have said the spinoff provision is simply unacceptable.

On Tuesday, the markup hearing for Shuster’s bill drew 86 amendments and lasted more than nine hours. Of the 18 roll call votes, all but one were on Democratic amendments. Ranking Member Peter A. DeFazio (D-OR) repeatedly portrayed what he called negative repercussions of the spinoff as he made the case for amendments. That included the likelihood that the private organization’s board eliminating the ticket tax, which airlines dislike, while making up for the lost revenue by instead implementing a tax levied on passengers.

Under a private corporation—one controlled by the major airlines—air traffic efficiency and safety risks will grow as the major airlines will place more planes in the air in the pursuit of profit. If the AIRR Act passes, the federal workforce that now oversees the air traffic control system will become private sector employees under the control of the airlines. There is little doubt that this move will result in reduced pay, cuts to training programs, and lower safety standards. Although this private corporation will tout the saving of tax dollars, airlines will pass along any costs to flying passengers who will decide fees per ticket without the oversight or consent of Congress as currently required.

“The United States has the safest, largest, and most complex aviation system in the world and that system should continue to be operated solely for the public’s benefit and safety, not for the benefit of wealthy airline CEOs that will operate the privatized system,” stated Randy Erwin, NFFE National President. “This legislation is offensive to every American because it will trade safety for airline profits. There is no other reason to privatize the air traffic control system.”  Erwin continues, “NFFE is working hard with its union coalition partners and with like-minded industry partners to stop this dangerous and profiteering legislation that destroys air travel safety and airline competitiveness.”

The current aviation authorization deal expires on Sept. 30. Until a new authorization bill is passed, NFFE will continue to fight the dangerous and profiteering AIRR Act (H.R. 2997), and the privatization of America’s air traffic control system.

Read the union coalition’s letter to the Committee, here.