Koch Brothers Aim to Strip Protections from Federal Employees Starting with the VA, Then at All Government Agencies 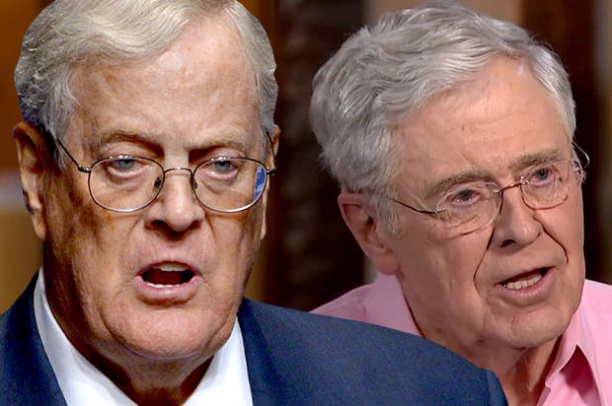 Billionaire brothers Charles and David H. Koch are using their network of conservative organizations to push for legislation that strips essential protections for federal employees in an attempt to disrupt the federal government. The passing of the “Department of Veterans Affairs Accountability and Whistleblower Protection Act of 2017” was a damaging first step in their vision of eradicating the layers of protections awarded to hard-working federal civil servants.

Americans for Prosperity (AFP), the Koch Brothers primary political advocacy group, has been historically dangerous to government employees, advocating for limits on the collective bargaining rights of federal employee labor unions and for right-to-work laws, while opposing raising the federal minimum wage. After removing protections for employees at the VA, they now plan on manipulating Congress to pass similar laws for other agencies in their plot to reform the entire federal government.

AFP President Tim Phillips illustrated the Koch Brothers plan as he stated, “We believe the veterans reform is a blueprint for broader reform of the entire federal bureaucracy,” and that, “we’re going to be seeking that in the coming years.”

Another Koch-funded group, deceptively titled Concerned Veterans for America (CVA), pressured President Trump by visiting the White House several times and urging him to have the Senate pass the initial VA bill. CVA President Mark Lucas echoed the same plans of AFP by saying, “This is an opportunity for us at the VA to bring it to the State Department, the Department of Education, Energy, all across our government,” and that, “the VA reforms are just the beginning.”

Veterans’ Affairs Secretary David Shulkin has already fired 526 VA employees since the President was inaugurated, which calls to question the true intent of the new VA law. Supporters of the new VA law claimed that it needed because it was impossible to fire employees under the former law. The number of VA employees fired was hidden until the bill was passed, and the number of fired employees is only expected to increase at an even higher rate.

NFFE is fighting to stop any additional laws that serve no purpose other than to politicize the federal government. Unfortunately, the Koch Brothers and their expansive network of support is well on their way to pushing for more destructive government-wide measures.