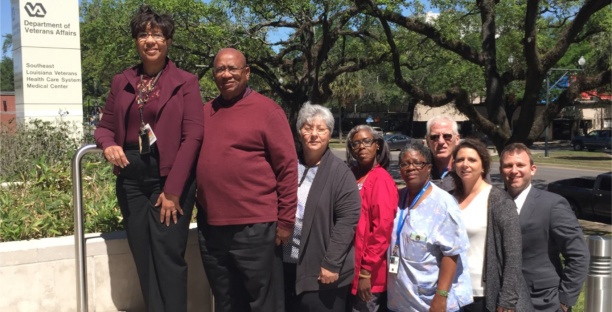 The NFFE Local 1904 organizing committee met with NFFE national and council leadership to discuss organizing and recruitment in 2017.

With all the changes that have taken place in the last year, a number of NFFE locals throughout the country have been renewing their commitment to building membership in order to build strength. NFFE Local 1904, located at New Orleans VA Medical Center and some of the smaller VA facilities in Louisiana, is no exception. With a brand new 1.7 million-square-foot state of the art hospital recently completed in the heart of New Orleans, where thousands of employees represented by NFFE care for veterans, NFFE Local 1904 is executing a plan to strike while the iron is hot and building membership as the on-boarding of hospital staff takes place.

This April, NFFE National President Randy Erwin and NFFE VA Council President Jeff Shapiro met in New Orleans with NFFE Local 1904 President Louis Jasmine and the local organizing committee to develop a plan to achieve significant growth within the local in the coming months. National Business Representative Liz Pittaluga and NFFE Organizing Director Bridget Fitzgerald also took part in the planning session. All the parties brought their collective experience to the table to develop a strategic plan aimed at strengthening the voice of members, communicating more effectively, and growing the local. The ultimate goals is to provide the absolute best representation to the hard-working professionals who care for our nation’s veterans in New Orleans and the surrounding areas.

Jeff Shapiro, VA Council President, remarked, “It is imperative that we come together as a union to build membership. It’s not just the job of the local, the NFFE VA Council, or the NFFE national office to organize new members. We are focused on bringing all our resources to the table to build membership and strengthen our locals.”

NFFE Local 1904 has already begun to execute their plan. The Local is currently making key improvements in communications and local visibility to raise awareness about the union and the value it provides to members. At the same time, the local organizing committee is putting a large emphasis on signing new members up at new employee orientations, a strategy that has been very successful thus far. In the coming months, the Local will be doing two week-long organizing drives that have the potential greatly increase membership.

“I am very proud of all the great work being done by the members of NFFE Local 1904 to build the local,” said NFFE National President Randy Erwin. “The local leadership understands the great opportunity before them with the expansion of the New Orleans VA, and they are doing all the right things to take advantage of that opportunity. They are putting in the hard work, and I am confident they are going to have a lot of success because of it. With their efforts this year, NFFE Local 1904 is going to be a very strong voice for our men and women caring for veterans in Louisiana.”