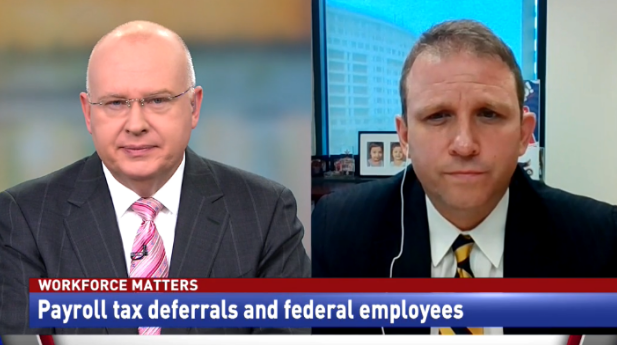 NFFE National President Randy Erwin appeared on Government Matters, an ABC News program based in Washington, D.C., to discuss the mandatory payroll tax “deferrals” for federal employees. OMB ordered agencies to stop withholding Social Security taxes (OASID) from federal workers’ paychecks starting September. As a result, many workers are finding a 6.2% increase in take home pay starting this month. In January, these same workers will see a 12.4% decrease in take home pay until the taxes are paid off.

“The President does not have the authority to do what he says he wants to do,” President Erwin told Government Matters Host Francis Rose on Thursday. “Federal employees know they are going to pay back the money next year.” President Erwin pointed out that it would take an “unprecedented act of Congress” to clear workers of their tax debt created by President Trump, and that such an act is unlikely.

“We are out of options,” President Erwin continued, referring to legal and legislative options explored by NFFE and other federal employee organizations. “We are doing our best to educate our members, telling them to save the money because you will need it next year.”

President Trump claims he will make the tax deferral permanent if he is reelected, prompting some members of Congress to charge that the tax scam is little more than a bribe-for-votes scheme by creating personal debt and then promising to forgive it if Trump wins. Others point out that the president lacks the authority to forgive the taxes, and that an act of congress is required to eliminate the two- to three-billion-dollar tax debt that will accumulate by January. Because of the budget offsets required by law, passing such a bill in congress is politically improbable before January when agencies begin collecting the unpaid debt. The IRS released guidance stating that fines and interest will apply to federal workers for any unpaid debt remaining in April.