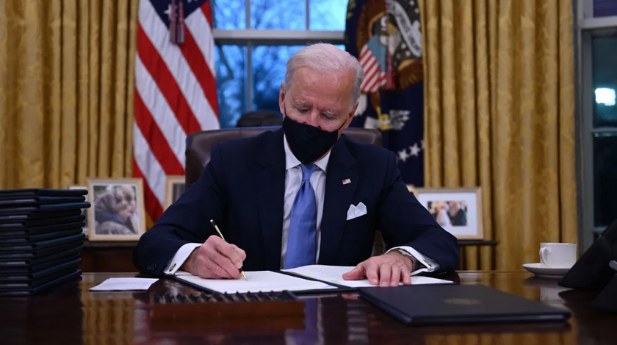 Washington, D.C. – Today, the National Federation of Federal Employees (NFFE) praises President Joe Biden for his bold action to protect and empower federal employees who are so essential to the country.  In a sweeping move to reverse unethical and potentially illegal authorities issued by the previous administration, President Biden revoked several Trump executive orders that created a system of patronage and limited worker rights and protections.

“Thank you, President Biden, for signing these executive orders today that will protect and empower federal workers,” stated Randy Erwin, NFFE National President. “This is one of the most meaningful actions in the history of the federal workforce. President Trump tried his best to turn the federal government into a patronage system.  He wanted the government accountable to him alone at the expense of being accountable to the American people. We were on a dangerous path, but now we are on the right one with President Biden’s actions today.”

Among the actions taken today, President Biden revoked Trump Executive Orders 13836, 13837, and 13839, restoring proper collective bargaining power and worker protections to the federal workforce.  The Biden executive order goes further to direct agencies to bargain over permissible, non-mandatory subjects of bargaining when contracts are up for negotiation so that workers have a greater voice in their working conditions.  President Biden also revoked a hiring and employment authority known as Schedule F, a Trump administration creation to allow political appointees to burrow into career government jobs and coerce or fire career federal employees for political or other unethical reasons.

“Intimidating federal employees and attempting to bust their unions was a cornerstone of President Trump’s plan to undermine the integrity of the civil service as we know it,” continued Erwin.  “For close to three years, we fought those awful Trump executive orders tooth-and-nail, and today they are finally gone.  This is a win for American democracy.  The importance of the executive actions taken today by President Biden cannot be overstated regarding the return of government accountability and transparency back to the American public.”