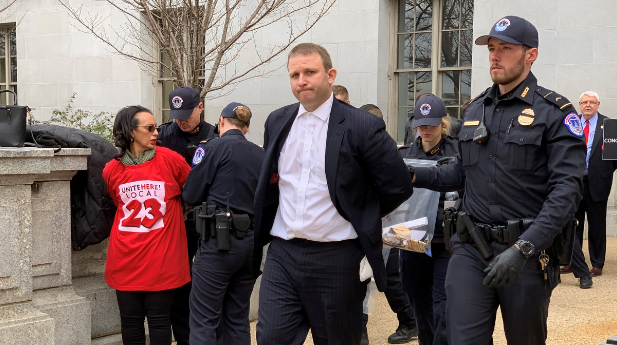 “They are playing games with people’s lives and it has to end,” stated Erwin during the Hart building protest. “McConnell needs to call a vote on a bill that can pass, and he needs to stop trying to protect the president from his own failed policies.”

The Senate will take up two bills Thursday, each with the potential to reopen the government however neither bill is expected to pass. Erwin and other federal labor leaders demonstrated to urge McConnell to bring the House passed bill for a vote. The House bill mirrors a funding bill passed by McConnell and the Senate last year, which would fund the government for the rest of the year except for the Department of Homeland Security.

“It is an honor to be arrested if that is what it takes to get the government open and paychecks to working families,” Erwin continued. “The damage done to American working families is unforgivable. It’s sad that it has come to this.”