NFFE to Senate Leadership: Call the Vote to End the Shutdown! 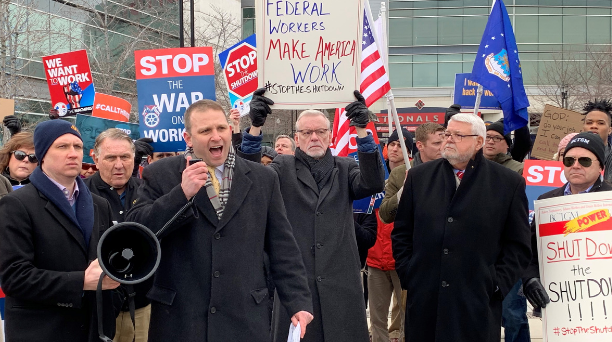 Washington, D.C. – Today, the National Federation of Federal Employees (NFFE) joined other federal labor organizations at Nationals Park—where the Major League Baseball team the Washington Nationals play—to demonstrate against the partial government shutdown. Senate Republicans chose Nationals Park as the location for their annual retreat, and federal employee organizations wasted no time calling out the irony of a ‘retreat’ from their paid responsibilities while hundreds of thousands of federal employees work without pay.

“I was proud to stand arm-in-arm with working people today, taking a stand for federal employees across the country, and insisting that Mitch McConnell and President Trump DO THEIR JOBS and stop the shutdown immediately,” said Randy Erwin, NFFE National President. “This isn’t funny! 800,000 federal employees across the country are suffering, and Mitch McConnell and President Trump are playing political games.”

The shutdown continues largely because Senate Majority Leader Mitch McConnell refuses to call a vote to end the funding lapse even though the House recently passed a funding bill identical to the one McConnell passed in December. Labor groups and furloughed employees demanded that McConnell pass the same bill he passed last month to reopen government and stop the financial suffering of a million-plus working families of federal workers and contractors.

“Senate Republicans have a constitutional duty to be a check on Executive power. They make the laws. The president implements the laws. Congress controls the purse strings, not the President, and they need to develop a backbone,” Erwin stated. “Federal workers are real people with real families and real financial obligations. They can’t afford to go weeks on end without a paycheck. But President Trump and Mitch McConnell have made it clear that they don’t give a damn about them.”
OFFICIAL PRESS RELEASE (print version)
Become a Member
NFFE Toolbox
Advocacy
Tweets by NFFE_Union