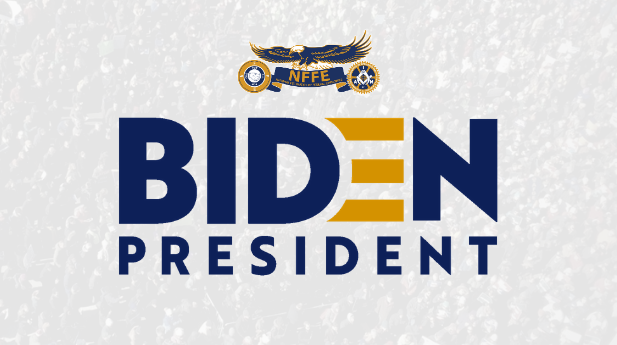 Throughout his highly accomplished 47 years of service, in which he served multiple terms as Vice President and as a U.S. Senator, Mr. Biden has proven his mettle as a stalwart supporter of federal employees and for all working people. NFFE recognized Mr. Biden’s commitment to federal labor institutions and the systematic protections that unions embrace to combat political corruption and coercion.

“The National Federation of Federal Employees is proud to announce its endorsement of Joe Biden for President of the United States and Kamala Harris as Vice President,” said NFFE National President Randy Erwin. “With Joe Biden you know what you are going to get. He has stood strong with federal employees and with working people in this country for decades. We know that if Biden is elected President, he is going to be there for federal employees and for working people again. He is precisely who we need in the White House.”

For each of the past four years, the Trump Administration unleashed an assault on the federal workforce that already fights to maintain its personnel numbers, further reducing the ability of agencies to complete their missions on behalf of the American people. Nearly every year, the Trump budget proposals requested:

“Federal employees are ready to see the Trump Administration come to an end,” said Erwin. “The federal workforce has never experienced this level of hostility from any administration regardless of party affiliation. President Trump has taken every opportunity both in his words and in his actions to disrespect hard-working federal employees and make it difficult for them to do the important work they perform for the American people every day. Federal workers have had enough of this disaster of an administration.”

In addition to attacking the workforce, the Trump Administration attacked the mandated missions of agencies, further dampening levels of productivity and morale to lows not seen since the government began tracking such measures of success.

“Federal employees are intrinsically tied to their work,” Erwin continued. “President Trump’s questionable policies have crushed morale and endangered missions. For example, the healthcare professionals represented by our union at the Department of Veterans Affairs (VA), who care for the American veteran every day, struggle to deliver that care because the Trump Administration is siphoning valuable VA resources into private hands while refusing to fill tens of thousands of VA vacancies. In another example, members of this union work hard to keep the nation’s national forests and other public lands properly managed and communities safe from wildfire, but Trump’s land management policies have led to longer, more dangerous fire seasons. Perhaps Trump’s most offensive move was his utter indifference that thousands of the federal workers we represent went without paychecks and were furloughed or forced to work without pay for 35 days last year. Federal employees have had enough of this nonsense. For us, the choice is clear. We support Joe Biden.”

The NFFE National Executive Committee considered the totality of the candidate’s record for federal workers and working people as a whole during its discussions regarding the decision to endorse a candidate for president. These qualifications included, but were not limited to, the likeliness of the candidate to support: